Yaktrax vs MICROspikes Review: Which is Better?  (2022)

If you’re going to be encountering the cold, you’re highly likely to run into ice. When you’re out there in nature you’re surrounded by water, shade, and mud.

The trio works together in the winter months to create some nasty terrain for hikers and backpackers. Fortunately, there are simple, lightweight solutions that can slot right onto your shoes and tuck away into a distant corner of your backpack. Yaktrax and MICROspikes offer a pair of remarkably similar products that can be a little difficult to choose between.

We did the research and compared the two against each other to figure out which truly is better!

In a hurry? Here’s the test winner after 10 hours of research: 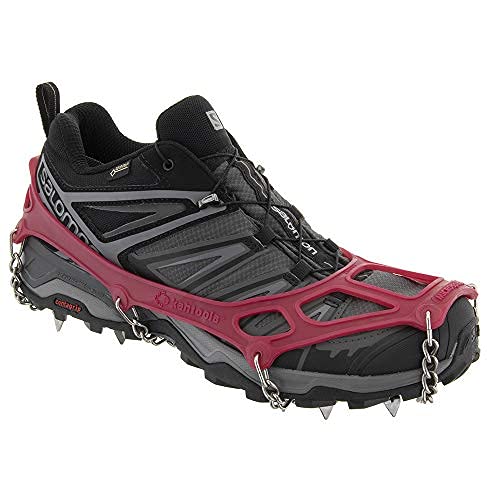 Yaktrax vs MICROspikes Review: Which is Better? – Overview 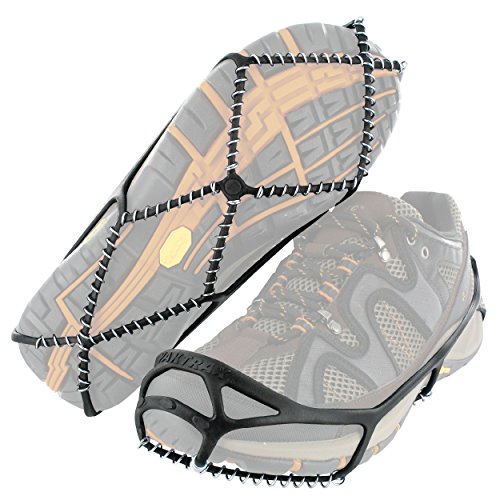 Yaktrax makes snow cleats that fit right over the sole of your shoe.  The elastic is forgiving enough to fit over your chunkiest hiking boot while remaining tight enough to cling to a running shoe (if you’re hiking in those during the winter for some reason).

The cleats are incredibly simple. They’re essentially coils of wire fitted around the elastic that give your body more traction when you’re making your way through the snow and ice. These coils are a cheap alternative to manufacturing spikes, and they’re safe enough to slip into your backpack without worrying about puncturing your rations or ruining your tarps.

Coils are also much cheaper to produce than the spikes that something like MICROspikes has to produce. These manufacturing savings get passed onto you in the form of lower prices. This makes Yaktrax incredibly appealing to someone new to winter hiking or a broke college student looking for an affordable inroad to a new outdoor hobby.

The core tenets of Yaktrax seem to be affordability and versatility. Most of the snow cleats Yaktrax offers are incredibly cheap, they tend to be something that most anybody would feel comfortable dropping a little bit of money on. None of their products are going to break the bank, and they aren’t designed to do that.

They’re also going to be less robust than more expensive competitors. The Yaktrax coils are more well suited to lightly iced surfaces than trudging across a frozen lake. Think more like jogging traction than heavy-duty exploration if you want to form an accurate picture of Yaktrax in your mind.

That amazing affordability can very quickly become a problem, however. Because Yaktrax and its products are cheaper than the competition, they’re naturally going to be a little bit more susceptible to damage. The biggest issue we had while testing out our Yaktrax was the early breakage of the coils meant to impart traction.

MICROspikes has it all in the name. These snow cleats are a network of small spikes and elastic that fit over your shoes in the dead of winter to keep you from falling on your butt. The manufacturing process for these spikes is a little bit higher than the readily available coils of wire that make up the Yaktrax attachments.

MICROspikes take a much more direct approach to traction. There’s nothing quite like sinking the teeth of these cleats into the terrain while you brush snow out of your eyes and battle the elements. MICROspikes give you an almost primal sense of stability when compared to Yaktrax during the heavy snow and thick ice.

You’ll want to reach for the MICROspikes when you feel like it’s time to make your way deep into the cold. They’re the kind of hiking and backpacking accessory you bring along when the going gets tough. They’re simple and lightweight enough to slap to the side of your backpack without significantly altering the weight of your pack, but they’re robust and clever enough to guide you along your trail without failing you during the difficult winter months.

It’s hard to say that MICROspikes could ever lose out to Yaktrax, but it’s important to remember that context is everything when you’re purchasing a product for yourself. We tested these opposing cleats in our natural habitat. There was a lot of hiking tough terrain during our test.

That meant that Yaktrax was more out of its element than the typical Yaktrax fan might have taken them. MICROspikes makes a mean cleat. They fit over our shoes without a hint of fuss and held on tight. We found ourselves able to comfortably navigate iced-over lakes, slick freezing debris, and sludgy mud with the help of or MICROspikes.

Having a set of cleats that dug a significant distance into the surfaces we were traversing made all of the difference in the world. We very quickly ran into issues with the Yaktrax, but that’s to be expected. They’re not quite designed for heavy-duty treks the same way MICROspikes are.

The principles are similar, you’ll still be slipping your regular shoes into these snowshoes after all. The problem of making your way across ice still stands. Yaktrax simply doesn’t set out to solve the icy terrain problems the same way MICROspikes will.

This isn’t a knock against Yaktrax, they’re playing a different ballgame, and you should be aware of that when you’re planning your trip and deciding on which accessories to bring along. Yaktrax is going to suit you well if you’re not planning to make your way across solid sheets of ice.

Keep these in your rotation for late-winter jogs and light hikes when the temperature begins to dip below freezing. When it’s time to challenge yourself and you need to make it up steep, freezing terrain and slick, frosting sludge then it’s time to invest in a pair of  MICROspikes to ensure you make it there and back.

Bonus tip: If the Yaktrax snowshoes catch your eye, you might want a crash course in snowshoeing!