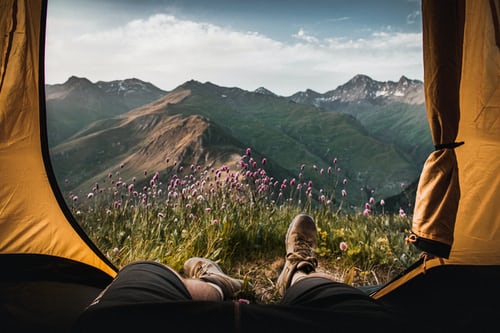 Pop-up tents might be easy to set up, but they’re not super easy to take down. It can be very confusing to fold it back the correct way.

And after a long camping trip, the last thing you might want to do is clean and put up a tent. However, it’s very important to fold your pop-up tent the right way so that you don’t damage it in any way. 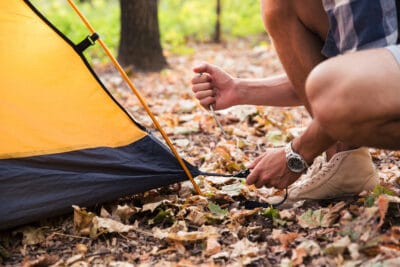 You might think that this is a trivial step, but it’s actually one of the most important steps. You don’t want to pull your tent out the next time you go camping and have dirt and leaves falling out of the bag. And, if a stick gets in the folded tent, it could puncture and rip the tent.

Clear out the different debris first, and then clean the tent fabric with a wet washcloth and laundry detergent. Let the tent dry out first so that it’s doesn’t develop mold. Also, you should leave the tent door unzipped to let out the air as you’re folding the tent.

Standing on one side of the tent, take the two poles on the top of the ridges of your tent and pull them together. It’s a very simple step that doesn’t require a lot of strenuous activity. You should keep a tight grip on these two poles in one hand before moving on to the next step.

If you mess up with the next steps, remember that you can always come back to this one and start over.

With one hand still firmly grasping the two top poles together, grab the two poles that make the outer edges of the tent. These should be very visible to your left and right. Once you have one of the poles, pull it up and over the two top poles.

Grab the other bottom pole to do the same, and you should be holding all four poles together. Your tent should now resemble a massive taco shell.

Step 4: Put Tent On Its Side

Keep your tight grip on the four poles as you do this. Since it looks like a big taco, make one of the open sides of the taco be touching the ground.  If you accidentally let one or all of them go while flipping the tent, just go back to step two so that you don’t fold the tent incorrectly.

Step 5: Fold Top Poles Into Your Back Hand

This step is the tricky one, and keep in mind that you have a new top pole because you’ve flipped the tent on its side. So, grab the top pole and push it towards your back hand. While doing this, kind of wrestle the tent to the ground. If you’re worried that you’re going to break the poles, don’t.

While the poles are lightweight, they’re also very flexible. However, don’t put your whole body weight into pushing these poles to the ground. They don’t require that much force.

Now, your tent should look like two circles on the ground. You could say that they look like an infinity sign too. You’ll want to just slide the circles into one another to make one circle. The tent will probably be full of air at this point, so give it time to release the air.

You should still be holding the tent poles very tightly because the tent will spring back into tent shape if you let go. If there’s still excess air in the tent, you can press your hands and knees into the fabric to try and get the air to go down. Keeping your grip on the poles tight, slide the folded tent into its bag. And, you’re done!

Pop-up tents have their advantages and disadvantages. For example, they don’t have a lot of space in them so you don’t want to try to have three adults sleep in a pop-up tent. If it’s just one person, a pop-up tent can be a great tool to have. Backpackers especially should invest in pop-up tents because they don’t require long setups and takedowns.

It only takes a second for the tent to be bedtime ready and maybe a minute to take the tent down. A quality pop-up tent can be expensive. However, it can be nice to not worry about getting your tent set up for bed when the sun is setting quickly. A pop-up tent is about $50 on Amazon. On the other hand, pop-up tents aren’t usually as heavy-duty as regular tents.

If you’re the kind of backpacker who likes to hike the backcountry, you might not want to get a pop-up tent. They don’t have as strong of material as regular tents. Also, some pop-up tents aren’t weather-proof, so you don’t want to be caught in a storm inside one of these. However, it just depends on what’s best for you as a camper. 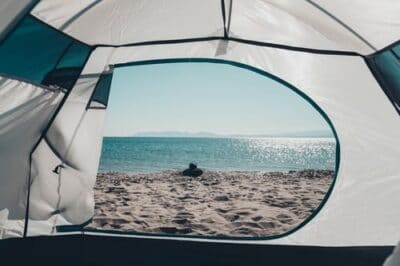 Beach pop-up tents have a different way of being folded.

Also, there are pop-up tents that are made for camping on the beach. These tents have a different way of being taken down than regular pop-up tents do. If your pop-up tent is a special beach pop-up tent, don’t follow these steps in case it messes your tent up. If you’re more of a visual learner, here’s a video that will show you how to fold a pop-up tent!