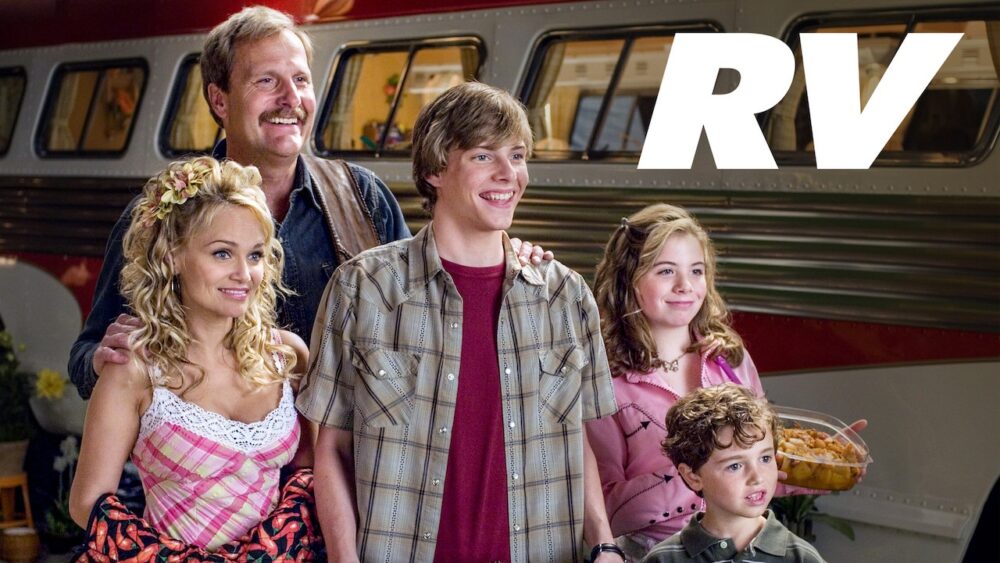 Today, we’re going to narrow the list down to the 10 best movies about camping of all time – in no particular order.

The 10 Best Movies About Camping of All-Time

The Great Outdoors follows two very different families as they spend their summer together at a lake house. What Chet (John Candy) imagined to be a time for his marriage and his family to be closer than ever, his brother-in-law Roman (Dan Aykroyd) arrives at the lake house unannounced to throw a wrench in all of Chet’s plans. From bears to water-skiing, The Great Outdoors is a family comedy that will make you laugh at the hijinks that can happen while camping.

Throughout the movie, Tacy (Lucille Ball) and Nicholas (Desi Arnaz) face a series of misfortunes during their trip, causing them to question whether they should keep the trailer or purchase a house instead.

Bob Munro (Robin Williams) is a beverage company executive who has to cancel his family’s family vacation to Hawaii to go to a work meeting in Boulder, Colorado instead. Bob tries to make the most of the situation by renting an RV and driving across the country, making memories with his family along the way. The trip doesn’t go as well as Bob planned, but will he even make it to the meeting?

David is a marijuana dealer forced to smuggle drugs from Mexico to settle a debt, so he decides to rent an RV and recruit his fellow neighbors to create the image that they are a wholesome, American family who is returning from Mexico on a family vacation.

When his makeshift family realizes just how much marijuana he has to bring back into the country, they come up with ways to work together to keep up the charade while convincing everyone around them that they’re just “The Millers.”

Shifting gears to a supernatural horror movie is The Blair Witch Project, which focuses on three student filmmakers who document their nighttime hike into the woods to try to learn more about the legend of the Blair Witch.

The three student filmmakers disappear, but their footage is found a year later, which plays out on the screen as you watch the movie. The movie is dark and shaky as the students run throughout the woods during the night.

Ernest P. Worrell is a maintenance man at Kamp Kikakee who aspires to be a camp counselor. He eventually receives the assignment but is in charge of a group of difficult kids who try to make his job as a camp counselor a difficult one. Ernest accidentally puts the camp’s future in jeopardy, where he and the difficult campers work together to save the camp.

The Parent Trap is about two identical twin girls who discover they are twin sisters while at summer camp. Their parents divorced after they were born, split up at birth. Determined to meet the other’s parent, the twins decide to switch places and pretend they are the other twin to fool their parents and learn more about the parent they never knew. The twin girls want to reunite their parents, so they come up with a scheme to get them back together, even though their dad has become engaged to Vicky, a woman who hates everything outdoors.

Two of the men, Ed and Bobby, land their canoe on the shore and come in contact with two local mountain men who terrorize them until Lewis, one of the city boys from Atlanta, kills one of the mountain men. They dispose of the body and continue their journey down the river when they come upon a set of rapids that destroy the canoes and throw the men overboard.

One of the men dies while the remaining three are injured and left to defend themselves against the remaining mountain man who has been stalking them on their journey. Will the city boys make it out of the Georgia wilderness alive, or will they join their friend’s fate and lose their life to the raging river?

Clark Griswold (Chevy Chase) decides to take his family on a cross-country adventure to southern California to visit Wally World, a family fun-park with rollercoasters and thrill rides. Instead of choosing to fly like his wife, Ellen (Beverly D’Angelo), asks to do, Clark purchases the iconic oversized station wagon to drive across the country.

The family makes frequent stops along the way, visiting Ellen’s cousin Catherine and her husband, Eddie. Knowing that Clark and his family will be driving through Pheonix, Eddie pawns Aunt Edna and her dog off on Clark and his family so that they can drop her off to see her son in Pheonix.

After both the dog and Aunt Edna die during the trip, the Griswolds will finally make it to Wally World and have the perfect family vacation, right?

These are the 10 best movies about camping of all time. There is something for everyone to love on this list, from family-friendly comedies to supernatural and suspenseful horror movies. Next time you are gearing up for a camping trip, watch one of these movies. They just might teach you what not to do on your next camping trip!