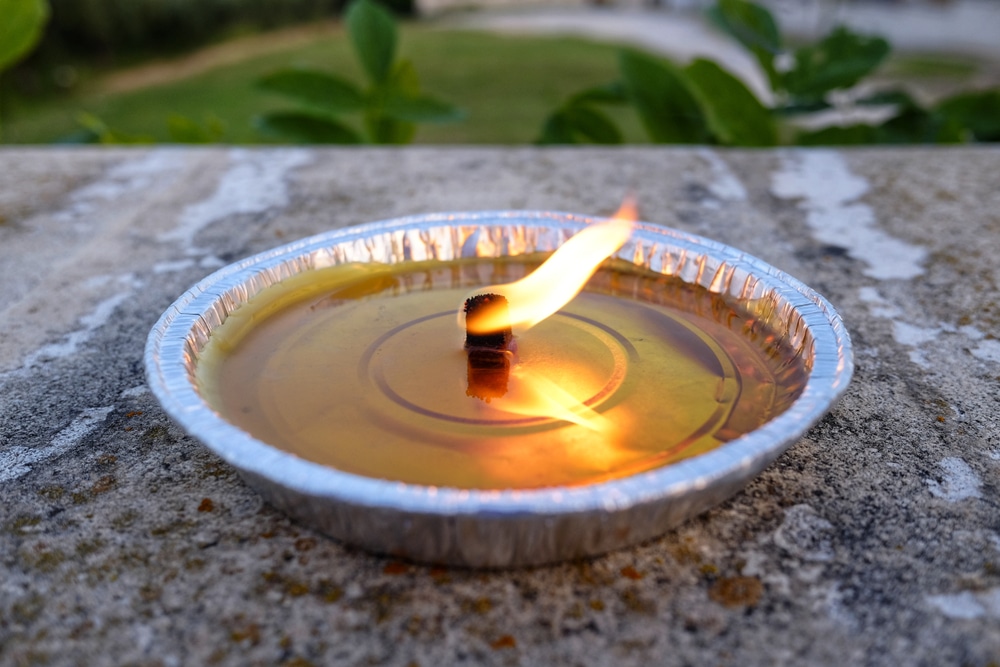 Citronella candles can be a great addition to your patio, garden, and yard.

They repel mosquitos and other bugs, smell nice, and avoid some of the dangerous chemicals in other bug repellents. The downside, however, is that citronella candles only work effectively in certain conditions (like low wind). Thankfully, you have a lot of other options to deal with a fly and mosquito problem, including bug sprays, foggers, mosquito nets, and other essential oils. 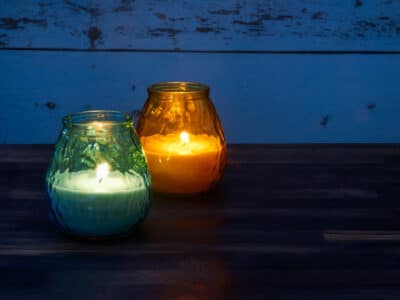 How Does a Citronella Candle Work?

The first thing to understand about citronella candles is that they’re powered by essential oils. It’s been used since the mid-20th century and is often favored as a more natural option than insect repellents containing harsher chemicals like DEET.

It’s obtained from a type of lemongrass or Cymbopogon. There are a few other essential oils that are used in this way as well, including oil of lemon eucalyptus, linalool, and geraniol. It’s important to note that of these three, citronella is the least effective.

For all essential oil-based mosquito repellents, the mechanism at work is that the strong smell masks the scents that insects use to find you. Namely, the smell of carbon dioxide as we breathe out. So citronella does work to an extent, but it’s not really the best repellent.

In particular, the amount of citronella in most candles isn’t enough to really do much. You’ll have slightly better success rubbing diluted citronella oil directly on your skin, just remember that it evaporates in about an hour and will need to be replenished more often.

Do Citronella Candles Work for Flies?

Unfortunately, however, citronella essential oil is not as effective at keeping mosquitos and flies away as some other options. In fact, the American Mosquito Control Association found that citronella is only about 50% effective against mosquitoes, flies, and ticks.

The effectiveness drops even farther if you get much more than three feet from the candles. So if you’re sitting for an outdoor meal or close to the candles, they may do the job, but they’re going to be useless if you’re trying to keep the whole yard free of mosquitoes and flies.

It depends a bit as well on the number of mosquitoes, flies, or gnats you’re dealing with. For a small number of bugs, citronella may work, but it’s important to note that studies have only been done on citronella’s effectiveness for repelling mosquitoes. The success rate with flies is even lower.

The Plus Side of Citronella

One reason that so many people still use citronella candles and other citronella products is that it’s a natural bug repellent. So, you won’t have to worry about the chemicals involved as with most other repellents. Other repellents use insecticides like DEET to repel and kill mosquitoes, gnats, and other flying pests.

These pesticides can be dangerous for humans in high doses and can cause problems for pollinators if they become too concentrated in one area. Plus it just smells better than bug spray! One other chemical to look out for is metofluthrin, commonly used in anti-mosquito foggers.

This can be an effective method of getting rid of mosquitoes and biting flies, but it should be used carefully because the Environmental Protection Agency rates it as a potential carcinogen. Foggers can also be lackluster in effect. If you’re not standing directly in the fog, they won’t do much good.

So what should you do if you need an effective fly and mosquito repeller but don’t want to use DEET or another potentially dangerous chemical? One slightly newer option is bug sprays and lotions that use picaridin. Picaridin, like DEET, is a synthetic chemical design to repel insects.

But it’s a true repellent, not an insecticide, so it doesn’t actually kill insects. This is important for maintaining environmental balance and it also seems to be associated with fewer side effects for humans. So picaridin can be better than DEET if you do decide to go synthetic.

Internationally, malaria is responsible for approximately 1-3 million deaths per year.

Why is Mosquito and Bug Repellent Important?

Before we go on, let’s look at why it’s so important to prevent mosquito bites and fly bites. Mosquitoes can be especially dangerous, carrying diseases such as west nile, zika, and yellow fever. It’s important to note that in high-risk areas, DEET is recommended by health professionals.

So if you’re in a location with high rates of malaria, west nile, or similar diseases, make sure to use bug spray with DEET. Biting flies, and especially sand flies, can spread debilitating diseases as well. And, of course, ticks carry Lyme disease, which can cause lifelong health issues.

So it’s not just a matter of avoiding a little annoyance! Insect management is serious business and in areas with a large bug population, citronella probably won’t cut it.

Still, citronella can be good for an area without a high risk of mosquito and fly-borne diseases. It smells good, isn’t very irritating, and you can actually make a citronella candle yourself! In fact, this can be a better option than store-bought citronella as the candles available at retailers usually don’t have enough citronella oil in them to be effective.

To make your own, just melt wax over a double-boiler, add your essential oils (you might add additional oils for smell), and pour into a candle mold. You can also just rub diluted citronella oil right on your skin, and this can sometimes be more effective than making it into a candle. Still, if you want to try it out, skip to the end for a quick video how-to.

While citronella does smell nice, just about any other mosquito repellent is going to work better. Even other essential oils like linalool and lemon eucalyptus oil are more powerful. For the most buggy areas though, essential oils just won’t cut it.

If you’re in an area with malaria or other dangerous diseases that can be transmitted by flies and mosquitoes, don’t take any chances. Go with DEET insect repellent, or, if you’re able to find it, try out picaridin, which is shown to be just as effective without as many potential side effects.

Bonus tip: Here’s how to make your own citronella candle!