One of the most populous of the United States, California is an incredible place to visit for many reasons. Not only is Los Angeles filled with many great places to go hiking, but Yosemite National Park in Northern California is also chock full of great places for day hikes, enjoying wildflowers, some of the best views in the state, giant sequoias (in Mariposa Grove), and exploring.

The biggest draw to Yosemite is the waterfalls, of which there are quite a few. However, there are also a few hidden gems throughout Yosemite as well, like rock formations, and panoramic views.

When you are preparing to go on one of these amazing Yosemite hikes, whether you’re backpacking or just going on a day hike, there are a few things you definitely want to make sure that you do. First, waterproof your boots because you’ll be hiking through muddy or wet terrain in order to make it all the way to the great views.

You also want to be sure to wear layers because the temperatures could change pretty drastically with the elevation differences. Speaking of elevation, it’s also important that you bring enough water (3 liters per day is recommended) because when you’re hiking uphill, your body will dehydrate more quickly than normal. And, in order to stay hydrated, you need to have the right water bottle.

Bring bug spray and sunscreen and a few high protein snacks in order to keep your energy levels high and to protect your skin under the heat of the sun.

Once your hiking day bag is packed and ready to go, the only thing that’s left to do is choose your hike. There are many great ones to choose from, so we’ve put together a list of the best hikes in Yosemite – ranging from beginner all the way to daredevil. 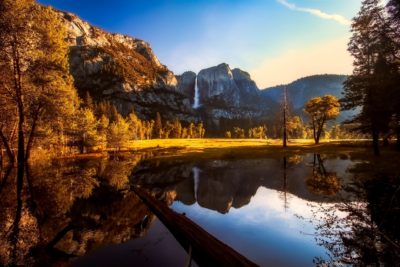 One of the biggest attractions in Yosemite is Yosemite Falls, which is the 5th tallest waterfall in the world. During the spring, Yosemite Falls is quite full thanks to melting snow. However, in the summertime and other parts of the year, the waterfall can barely be falling. If you really want to see Yosemite Falls in action, we recommend going in the spring or early summer.

There are a few different hiking trails that will lead you to the waterfall. Check them out below.

The Yosemite Falls Trail is one of the most historic trails in Yosemite. It was built back in 1873 and leads all the way up to the Yosemite Falls waterfall. The hiking trail is a bit winding, but be careful not to veer off the path because next to the trail are pretty steep drops.

The hike is pretty short at only one mile, however it climbs very quickly at 1,000 feet. The first stop to make is at the Columbia Rock where you can see great views of nearly everything: Yosemite Valley, Half Dome, and Sentinel Rock.

Past Columbia Rock you can climb an additional half mile to check out Upper Yosemite Fall. You might be surprised at the top when you see how small Yosemite Creek is compared to the large size of the waterfall itself. Be careful when climbing Upper Yosemite Fall because it can be slippery and you will be climbing directly above a waterfall.

This trail, because it’s paved, is also wheelchair accessible. 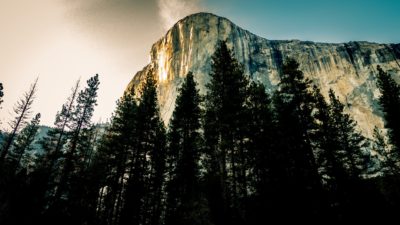 After the Yosemite Falls waterfall, the Half Dome is one of the most popular tourist destinations for hikers. In order to hike to the Half Dome, you’ll need to be prepared for a pretty intense hike consisting of a little over 14 miles and an elevation gain of 4,800 feet. Although a popular trail, this hike is definitely not an easy hike and not for beginners.

The best time of year to visit the Half Dome is between May and October; however, you’re more likely to get a good view of the waterfall earlier in the season rather than later.

The top of Half Dome has a summit of 8,842 feet. The last 400 feet actually have cables that are there to help adventurous hikers reach the top safely.

This trail is ranked as one of the 10 most dangerous hikes in America and requires a permit to hike. Despite it’s danger, it is still the most popular trail in Yosemite and can be an incredibly rewarding hike once you make it to the top of Half Dome.

If you decide to hike the Four Mile Trail, be prepared to actually hike twice as long because the trail is actually only 4.7 miles one way. The trail has an elevation gain of 3,200 feet and is considered to be pretty difficult.

As with the other hikes that lead to waterfalls, it is best to hike in the spring or early summer in order to actually see the waterfall in action. Throughout the hike, you’ll be able to see Yosemite Falls, Sentinel Dome, El Capitan, and Half Dome.

This hike is incredibly rewarding because you’re able to see almost all of the iconic sites of Yosemite Falls in one hike. There’s also a Glacier Point shuttle bus to carry hikers back to the valley, which would keep the hike true to its four mile claim.

Yosemite Falls is full of difficult hikes and Panorama Trail is no different. This 8.5 mile (one way) hike with a 3,700 feet elevation gain is not considered to be an easy hike at all. This trail is also best during the spring and early summer in order to see the waterfall.

For a slightly easier, yet longer, trail you could hike the Glen Aulin Trail. This trail is 11 miles round trip with an 800 feet elevation gain and is considered to be moderate. However, the hike is only considered moderate due to the length of the hike, so it’s pretty fair game no matter what your experience is.

With this hike, the farther you hike, the more waterfalls you’ll run into. 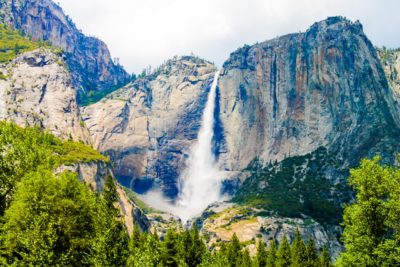 The hike follows the Tuolumne River towards Glen Aulin and passes by Tuolumne Falls, White Cascade, California Falls, LeConte Falls, and Waterwheel Falls. White Cascade is also a great waterfall to swim under, so be sure to bring your bathing suit!

The Pohono Trail is a 13.8 mile hiking trail, but instead of hiking upwards, this hike declines with an elevation decrease of 3,400 feet. This hike travels through Yosemite’s South Rim and you’ll be able to see Dewey, Crocker, Stanford, and Inspiration Point. However, that’s not all you’ll see. From the south rim, you can also catch sight of many waterfalls like Vernal, Nevada, Yosemite, and Bridalveil Falls.

This is not an easy hike, and can even be difficult to find. However, you can spot nearly every single famous sight within Yosemite Falls.

In close proximity of the Pohono Trail is Taft Point. This trail is a quick and easy 2 miles round trip hike that gives hikers a beautiful view of both Yosemite Valley and El Capitan. You’ll also be able to spot the Sentinel Dome from this hike.

Getting to the top of the dome can be a little bit of a scramble, but it’s worth it for the 360 panoramic view from the top.

Clouds Rest is another one of Yosemite’s most difficult climbs, again primarily for the length. This hike spans across 14.5 miles and has an elevation gain of 1,775 feet. This trail is easier to hike than the trail to Half Dome and also much less crowded.

Hiking this trail can bring you to views of the Half Dome, North Dome, El Capitan, and Glacier Point. If you’re looking for a safer alternative to the Half Dome, this is the hike for you.

Cathedral Lakes is a moderate hike that is great for hikers looking for beautiful views, but an easier hike. This trail is 7 miles round trip and has an elevation gain of around 1,000 feet.

Cathedral Lakes is made up of both Lower and Upper Cathedral Lake, both of which feature impeccable views of Cathedral Peak. The peak got is name from its steeple-like formations.

The last hike that we’ll feature is located at the far east end of Yosemite Valley. Mirror Lake Loop is an excellent place to visit no matter what time of year it is. However, the lake at the valley floor is fuller during the spring and early summer due to the snow melting.

The lake received its name from its mirror like reflection qualities. When the lake is calm, you can see a reflection of the Half Dome as well as Mount Watkins. There is a trail that goes around the lake and is a great moderate hike. 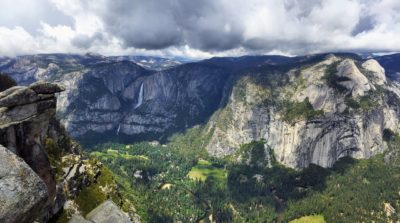 The hike is paved, which makes it perfect for pets and strollers. The portion around the lake is the shorter section of the trail. The full trail is 2 miles long and, because most hikers turn around at the lake, the remainder of the trail is pretty secluded.

If you’re interested in checking out Mirror Lake, you should definitely consider going sooner rather than later. One day, the lake will dry and form a valley instead.

Which Yosemite Hike Will You Try?

Yosemite has a slew of hiking trails. Most of the trails, however, are considered to be relatively difficult. Don’t try any Yosemite hike that you aren’t fully confident that you can successfully handle and never hike alone.

Be sure to maintain proper trail safety and always follow trail signs. Wear boots with proper traction and waterproofing. Always carry a water bottle with you in order to stay hydrated out on the trail.

Remember that most of the trails in Yosemite National Park are better for hiking or backpacking and amazing views during the spring and early summer months and because of that are subject to being more crowded (both on the trail and in the parking lot). Also, due to the melting snow it is possible that they could be slippery, which is why proper hiking boots are so crucial.

Are you hiking in Yosemite National Park anytime soon? Whether it’s the Mist Trail, Yosemite Falls, Glacier Point, Nevada Fall, or Sentinel Dome, let us know which trails you decide to hike! We can’t wait to hear all about your next adventure.