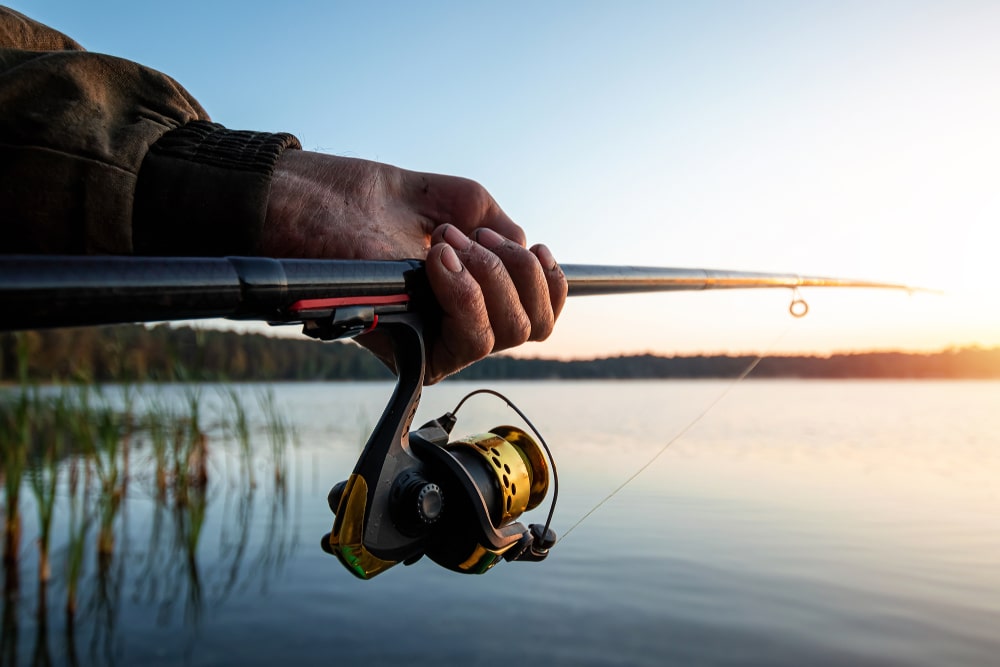 Have you ever been wrangling in a trophy fish, only to have your precious monofilament or braided line get horribly messed up or damaged?

And now you’ve got a spool full of twisted, knotted, and otherwise unusable lines that you’ll have to cut up and get rid of? Even worse, you’ve never had to do something like this by yourself and you’re at a loss as to how to re-spool your reel. This is why we’ve put together this guide on how to put a new line on your fishing reel.

Before we get into step-by-step guides on how to put a new line on your fishing reel, we’ll first look at all the different types of reels. The type of reel you have will change how you should replace your line. 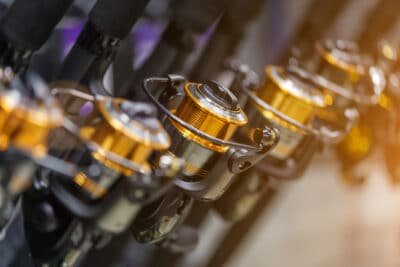 There are 3 types of fishing reels: spincast, spinning, and baitcast.

A Spincast reel is by the far the simplest model of a reel on the market. It has a very simplistic design that makes it easy to use, making it popular with beginners, young anglers, or fishermen on a budget. While it’s not the most widely used model, it certainly has its merits.

This reel has all of its inner workings hidden beneath a nose cone. On the bottom of it, there’s a handy little button that will act as your reel control. Pressing it will toggle between letting the reel drag out or locking it. A unique feature of this type of reel is the drag adjustment.

Essentially, this tool will adjustment how much resistance a fish will feel when they’re pulling the line. These reels are extremely easy to cast, hence their popularity with fledgling anglers. Simply hold down the button on the bottom of the reel, swing the rod, and then let go of the button.

Upon release, your line will fly out to wherever it is you were pointing with your rod’s tip. You can stop your line at any moment during the cast by pressing the button again. There are a few problems with this type of reel. The covering over the spool has a tendency to capture water, dust, and other debris causing damage to the line.

Unfortunately, these types of reels are usually not the best quality and don’t typically last more than one fishing season. They also don’t have as big of casting distance as other reel types and generally aren’t as precise.

Next up are spinning reels. These are a step up from Spincast reels because they’re just a little more complicated. Spinning reels are the most popular type of reel out there and many expert fishermen likely have one or have used one in the past.

They’re also popular with beginners as they’re not hard to use. A spinning reel does not have any sort of covering on it as you’d see on a Spincast reel. Instead, this one uses a completely open design that features a drag adjustment mechanism on top.

By far, the most important feature on a spinning reel is the metal bail. This device locks the line, prevents it from unspooling, and ensures that the line will come back evenly on the spool as you reel in. The final feature of spinning reels is unique to them specifically.

This type of reel is attached to the underside of the rod, unlike Spincasters or Baitcasters. The position of the reel creates a more natural holding position and reportedly allows for a more balanced cast. Casting a spinning reel is extremely easy and really only requires a few auxiliary steps for a successful cast.

You’ll need to place a finger on a small part of the line that’s exiting the spool, above the bail. Then, you’ll simply disengage the bail and give your rod a swing, as it comes forward, take your finger off of the line and let your lure loose.

When the bait is landed you’ll want to reengage the bail. Most spinning reels will actually do this automatically when you start reeling in. However, that first spin of the reel can sometimes unbalance the line and cause a tangle that will ultimately require line maintenance if not a complete replacement.

This is the most advanced type of fishing reel, both in terms of technology and in terms of the learning curve. The reason for this is because this type of reel features more moving parts than the previous two. However, mastery over a Baitcasting reel will ultimately give you the greatest casts you’ve ever seen.

But what makes this rod so special? Well, besides the semi-enclosed and more durable makeup, the Baitcaster reel has two extra mechanisms that increase performance and allow for added customization. These two additions are the spool tension knob and the braking system.

These systems allow you to adjust how quickly the line will spill from the reel. Unlike the Spinning reel, a Baitcaster does not have a bail. While casting you’ll need to use your own thumb and press against the spool in order to stop the line from going out.

Once your bait has hopefully landed in your desired spot, simply press the clip to keep the line locked. This type of reel is recommended for advanced users because differing weights in lures require special settings while using the spool tension and braking system.

You’ll need to make sure to mess with both of the mechanisms to find the sweet spot every time you use a new lure. Additionally, these lures are the most expensive of the three.

How to Put A Line On Each Fishing Reel

Now that we’ve covered the different types of reels, we can get into how to change out the lines. We’ll start with the most simple type of lure, the Spincaster.

How To Put Line On A Spincaster:

How To Put Line On A Spinning Reel:

How To Put Line On A Baitcaster:

A fly fisherman attaches a yellow line to a spinning reel.

How To Attach New Line To Old Line

Something we’ve mentioned a few times in this article is that you can save the old line of your reel. This is something we highly encourage as it can save time and money. But when is it appropriate to try and save your reel’s old line? The answer to that question really depends on how big the damage is to your line is.

If your line is super tangled up and looks like a literal bird’s nest, then there’s no point in trying to save it. At that point, the line is far too tangled and damaged. If there’s only a little line twist, it can be salvaged. Another point to watch out for is how much weight your new and old lines can withstand.

If you plan on angling big fish, it probably isn’t the best idea to attach the new, stronger line to an older, weaker one. You might lose that trophy fish in the heat of battle! Instead, it’s best to just replace the entire spool. The actual process for attaching new lines to old ones is actually pretty simple.

First, you need to clip off whatever tangled part of your old line is left to make room for the new line. Once you’ve done that, it’s time to attach the new line. The best way to do this is to use a special kind of knot known as a double uni knot.

The process for tying this sort of knot is a little complicated and is better explained by watching a demonstration, rather than having us try to explain it to you. This video will show you the quickest and easiest way to tie such a knot.

As you can see, putting a new line on a fishing reel isn’t all that complicated. The biggest thing you have to worry about really is tying the right knot on your fishing line and making sure you don’t over-spool your line. If you’d like to learn more about the different types of fishing knots, check out this article!