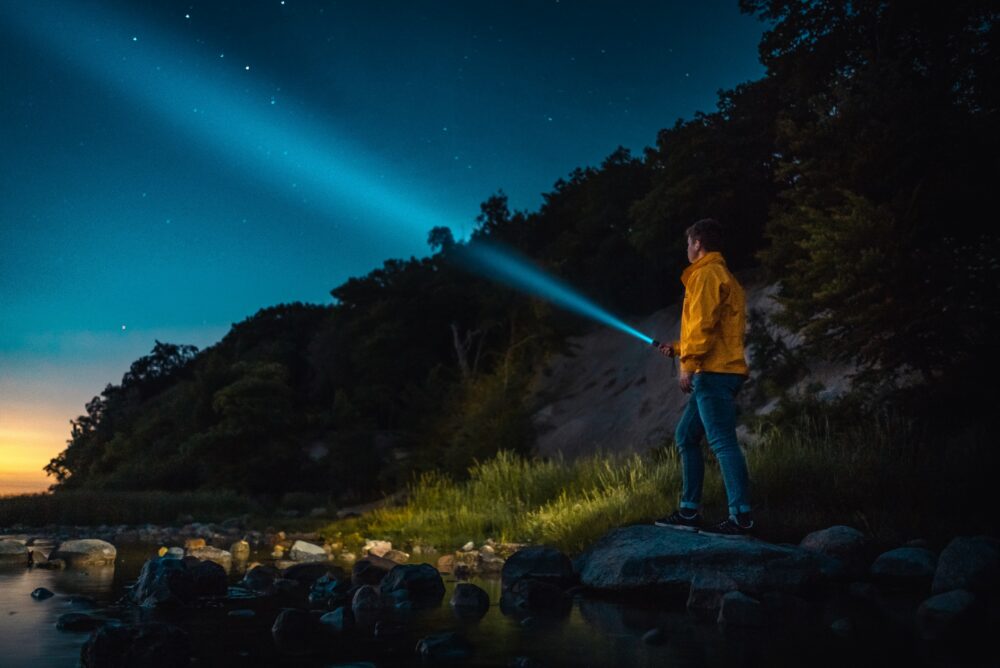 If there’s one thing you can’t leave at home when you heading out to hike and backpack, it’s your flashlight. Your flashlight is one of the single most important tools you can pack away with your things. A good flashlight is going to get you out of a sticky situation.

If you get caught out after dark, your phone isn’t going to cut it, a good flashlight will keep you going well after the sun goes down without risking injury or getting yourself turned around in the dark. There’s a lot out there, though, so we’re here to find the very best of the best for you.

After 15 hours of testing and research, we can confidently say the Soonfire MX Series Tactical Flashlight is the best option. 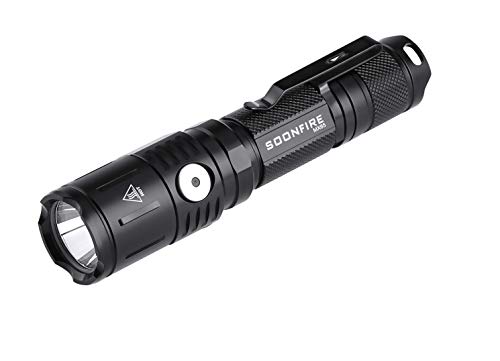 With a rechargeable battery, several different lighting modes, and a water-proofed aluminum body, this flashlight is more than just a tiny little tube of light. It’s a symbol of security and peace of mind that’s going to guide you through the darkest nights no matter how much abuse it’s endured.

The Soonfire MX Series flashlight is all about pumping out and controlling the amount of light you’re shedding on the world around you. There are several different settings on this flashlight that you can control with a single click of the easily accessible button on the end of the flashlight.

It’s designed with comfort and ease of use in mind. It’s the kind of flashlight that’s person-forward. You can tell that this flashlight was designed to be simple to use and incredibly versatile. The most notable setting on this flashlight is probably the low-power reading mode.

If you’re the kind of camper that’s looking for solitude and time to reconnect with the world around you, this reading mode is a great way to sit down in your tent after a long hike and just totally unwind. It’s nice to be able to depend on a flashlight for more than just perilous emergency situations. When you’re able to just attach a flashlight to the ceiling of your tent and kick your feet up with a good book in the solitude of the woods.

A few clicks on the button will jump the brightness up incrementally. At its maximum brightness, this flashlight is able to put out a mind-boggling 1060 lumens. For reference, that’s almost the amount of light a 75-watt incandescent bulb puts out.

You know, the kind you use to light up entire bedrooms? It’s remarkable and pretty reassuring to see that much light spilling out of such a small package. Imagine carrying around a living room’s worth of light in your bag every single time you go out for a hike.

The maximum setting of this flashlight is a lot for it to handle. The bulb is capable of putting out that much light, but light means heat, and if something this small is going to be this bright, it can get pretty hot. There are security measures, though. If you pop this light onto its highest setting, it starts counting down from three minutes. This flashlight gets really hot when you’re using it to turn night into day.

This flashlight’s battery lasts an incredibly long amount of time. Disregarding the temperature-based auto-shutoff, you can get an hour and a half off of a full charge at the highest setting. That’s an hour and a half of the kind of light that’s equivalent to the illumination capacity of an entire house.

That’s pretty impressive on its face, but you’re not going to need the maximum setting of this flashlight to navigate the night, so you can get much more light out of it for a lot longer if you bump it down a little bit. At the lowest setting, you can get about 300 hours of light at the lowest setting. That’s over a week of constant light off of a single charge.

This battery is incredibly reliable, partially because it’s not just a run-of-the-mill AA battery. This flashlight is powered by a 18650 Panasonic battery. These are capable of taking and holding a charge much better than a batter you’re used to just tossing into your TV remote.

It also has the added benefit of taking a charge from a micro USB charger. If you’re the type to carry around an external battery, you can massively increase the battery life of your flashlight. Unless you’re sequestering yourself deep in the woods for weeks at a time without any sort of backup power, you’re not going to be running out of battery power for this flashlight.

The only real downside to the battery they choose to use in this flashlight is the slightly increased difficulty in replacing it. You’re most likely not going to have to, but you’re going to find yourself in a specialty battery store if the time ever comes.

That’s not a huge hurdle, by any means, especially in the face of all of the benefits this flashlight can bestow on you, but it is a consideration that needs to be taken if you’re thinking of taking this flashlight on a backpacking trip with you.

This flashlight isn’t just a light attached to a switch, and for that we’re grateful. There are settings on this flashlight beyond the low, medium, and high. It’s nothing as fantastic as a multitool flashlight that will totally replace all of your tools in your bag, but there are a couple of settings that will help you out of a jam in case things go south.

Note: We scoured online markets and tested 11 different lightweight flashlights, and the best is the Soonfire MX Series Tactical Flashlight.

Shining a Light on The Flashlight

This flashlight is a winner all around. It’s powerful, it’s dependable, and it’s pretty much impossible to beat for its size and price. If you’re looking for a new flashlight that’s going to fit comfortably into your hiking pack, then don’t look any further than this one here.

You could be in the dark for an entire week with this thing, and you’d still have a full day of light left. At its most powerful, it can replace the overhead lighting in the largest rooms of your home without batting an eye. It’s smart enough to shut down before it reaches catastrophic temperatures, but not so smart that you’re losing precious battery life to an electronic brain.

This is the kind of flashlight that comes to mind when we think of functionality and form. From the belt clip to the morse code SOS setting, this flashlight is all about illuminating the world around you in ways that will get you home safely no matter what your situation is starting to look like.

The micro USB charging port is a clever feature that means that you’re going to be able to charge your flashlight in nearly every situation. Gone are the days of praying you find an outlet while backpacking up the coastline, just make sure you’re charging up a portable charger, and you’ll easily pull several weeks out of this flashlight.

There are a lot of things that make for a good flashlight. If you’re still not quite sold on this one, then maybe we can help you nail down some of the most important qualities of a good flashlight. If you’re taking a flashlight out on the trail with you, then it’s not enough to just grab one with a big bulb and hope that’s going to be enough. Anything can happen out there, and you don’t want to learn the hard way that you didn’t pick the right light. We want to walk you through some of the methodologies behind finding the best flashlight in 2021.

There aren’t many, if any, alternatives for power in your flashlight. Look for a flashlight with a powerful long-lasting battery, those are the flashlights you can depend on when the chips are down. Output, throw distance, and the ability to focus your beam is all well and good, but once your battery dies, that’s all out the window.

Once you’ve found a flashlight with the battery power to keep up with you, you should also look for something with backup power. If you’re able to keep your batteries topped up without having to bend over backward. A flashlight with an easily rechargeable battery is going to give you pretty much endless peace of mind.

Once you’ve nailed down a flashlight with a battery that won’t fail you in the middle of the night, you want to start looking at the output. It’s important to remember that you’re going to be using this outside. You want to look at throw distances and lumens.

Lights are only useful when they’re being reflected and absorbed by your surroundings. Think about how the light on your phone seems useful enough when you’re poking around underneath your refrigerator, but as soon as you try to use it outside it doesn’t quite cut it.

When we looked at the Soonfire MX, the throw distance and the maximum output is what told us that this was a remarkable flashlight. The 360-yard throw distance means that you’re going to be illuminating your surroundings outside enough to guide you back to your destination.

The high-lumens output is also what’s going to set a flashlight apart from the competition. Lights depend on output and distance to be useful. If you’re finding a flashlight that lasts a long time, but its maximum output and throw distance are incredibly limited, then you’re going to have a bad time.

The Cherries On Top

The Soonfire MX became our favorite flashlight after all of the testings we’ve done because of the additional flourishes. A good hiking flashlight takes into consideration the realities of being out in the wilderness. When you’re at home, you’re in a moderate environment. You’re surrounded by predictability and cool dry atmospheres. Your hiking flashlight isn’t going to have those luxuries, so it needs to be sturdy and resilient.

The body of your flashlight should be made from sturdy material like aluminum. When we think of aluminum we tend to think of something like tin foil, but they make airplanes out of aluminum as well. It’s a material that’s light and strong, which makes it ideal for something like a lightweight flashlight that doesn’t take up a ton of room in your hiking backpacks.

Hiking and backpacking involve jostling your belongings around for hours at a time. You don’t want your flashlight to become one a casualty of transportation. You also want to look out for waterproofing. Your travels are eventually going to come across water.

If you want a flashlight that’s going to survive being outside, you’re going to need a flashlight that’s resistant to water. Even if you’re not hiking near bodies of water, don’t forget that water comes from the sky as well. Getting caught in the rain is the single way water can sneak up on you, and you don’t want to be caught unprepared.

Note: We put in the research so you don’t have to. The best lightweight flashlight is the Soonfire MX Series Tactical Flashlight.

Bonus tip: Don’t take the manufacturer’s word for it, if you’re the type to fact-check everything, here’s a quick video that teaches you how to measure the light output of your flashlights.